Types of Land Survey Services: Which Do You Need? 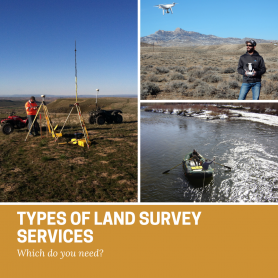 Land surveying has existed for about as long as the idea of land ownership. However, over the years, the technology of measurement has improved drastically. The uses and specific needs for different types of surveys have also evolved.

Surveying is the measurement and mapping of land, sea and air space. Surveyors identify, document, and verify these maps and measurements. A survey map includes a very detailed depiction of boundaries, elevations, and existing features, whether natural or man-made.

Surveyors work with sophisticated equipment to make measurements, calculations and produce mapping that supports the findings of their survey. At T-O Engineers, our surveyors go a step further than is typical for other firms, as they have drones (UAVs and boats) to increase the capacity of their measurements and maps. This also helps them to operate at a more efficient pace than other firms and to cover more ground. Our equipment, specifically the drones, enable our surveyors to take on larger projects than most firms, as they are able to map large areas and collect information from the air and waterways. Our surveying services include:

Surveying is essential for every construction project. The survey assists surveyors, engineers, and construction teams in planning their projects for optimal results, whether it's for residential buildings, commercial buildings, or infrastructure projects. These surveys help the parties involved to design and construct a project that is predictable. There are a number of types of land survey services that can be used for different purposes. The type of survey you need for an upcoming project depends on the type of project you're planning. Let's take a deeper look at a few of the most common types of land surveys.

ALTA/NSPS surveys (formerly known as ALTA/ACSM) are designed to provide specific land information that is needed for a parcel of land, typically for commercial financial purposes. It provides the parties involved with location and survey data needed for land titles and financial decisions. An ALTA/NSPS survey typically shows the relationship between existing improvements on a parcel of land as it relates to the boundaries listed on a property's deed. These surveys are comprehensive, as they include all improvements, easements, zoning classifications, rights-of-way, waterfronts, and more.

Boundary Surveys sound like what they are! They are used to locate the boundaries of a parcel of land physically on the ground. This kind of survey involves field and record research that will include computations and measurements needed to set boundary lines in accordance with state laws. If needed, a boundary survey can also involve locating encroachments and easements.

Construction surveys help direct construction personnel, according to development plans, through means of staking out structures and improvements located on a property. This includes all buildings, walls, fencing, roads, and utilities. A construction survey may also include an as-constructed survey.

Topographic surveys analyze and define the shape and physical characteristics of a particular landscape. Surveyors determine the height of different geographical coordinates and draw contour lines to indicate varying elevations. They then utilize these findings to create topographical maps that can be used by engineers, architects and project managers to assess existing terrain for future projects.

Subdivision surveys (also known as partition surveys or platting) are used to divide parcels of land into smaller lots, tracts, or estates.. They are required to be approved by local and state government agencies. Typically, before construction begins, planning commissions or zoning boards must review and approve the subdivision.

Bathymetric surveys map the bottom of waterways and physical features underwater. T-O Engineers use boats and drones along with echo sounding technology to take measurements beneath rivers, lakes, ponds, and waterways. The measurements are used to create maps of the surface below water.

Which Survey Do You Need?

Chances are high that you need at least one survey conducted for your upcoming project. If you aren't sure which one(s), just ask us! We're happy to discuss your project and to help you identify which surveys you'll need to move forward.