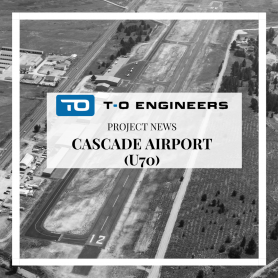 T-O Engineers was recently highlighted by The Star-News for completing a $1.9 million airport runway reconstruction project at the Cascade Airport in Cascade, Idaho.

Pilots now have a smooth runway to land or take off from the Cascade Airport following completion of a $1.9 million runway reconstruction project.

The project was 90 percent funded by a grant from the Federal Aviation Administration. The Idaho Transportation Department’s Division of Aeronautics provided $39,000 and the city added $156,345.

The work was needed because the runway was over 25 years old and experienced severe cracking and frost heaves.

The safety of aircraft had become an issue, with the state listing it in “very poor” condition, said Kevin Bissell, the airport engineer with T-O Engineers in Boise.

The first phase started last October and included installation of a new rotating airport beacon and tower, as well as a runway lighting system that pilots could activate remotely when needed.

When not in use, the lights remain off, saving the city the expense of continuously lighting the runway.

The second phase began in August. The existing asphalt was pulverized and reused as base material under the new strip.

Grading improvements were also made to the airfield to improve drainage and to provide overrun areas at each runway end. Once the grading was complete asphalt pavement was place to provide a new landing surface.

The airport generates a total annual economic activity of $3.1 million, according to the ITD. About two dozen airplanes are based there with 35 aircraft hangars.

Arnold Aviation’s mail route into the backcountry is the last in the lower 48 states and the airport serves as a base for aerial firefighting operations.