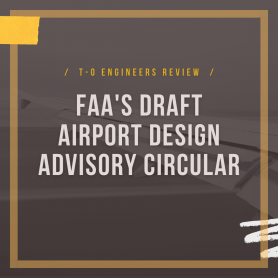 FAA Advisory Circular (AC) 150/5300-13, Airport Design has been the “bible” of airport design in the U.S. since 1989. It has been revised many times over the years and we have been using the current version, 5300-13A (13A) since 2012. The FAA recently released a draft version of this foundational guidance, 5300-13B (13B). We’ve spent some time reviewing the document and have a few impressions to share. If you’re really interested, we have a more detailed review that’s available at this link: A Review of the Draft FAA Advisory Circular 150/5300-13B, Airport Design.

Overall, we like the new document a lot. It is more thorough and covers several areas that have consistently come up as questions in our work on airports in this region. Below are some brief comments on what has changed.

First of all, it’s bigger. At 411 pages, 13B is almost 90 more pages than 13A. This increased length appears to be primarily through an effort to be more thorough. If you’re familiar with 13A, at first you may have some trouble finding information. In some places the document is reorganized and reformatted significantly. There are also quite a few cosmetic and formatting changes.

One of the big changes is the use of language like “standard”, “recommended practice”, “requirement”, and “design consideration”. These terms represent different levels of the applicability of design guidance and will be helpful in determining where you may be able to get an exception from the guidelines in the AC.

There is a new section regarding “Wrong Surface Events”, which are takeoffs or landings on the wrong runway or a taxiway. These have been a point of emphasis from the FAA for some time. There are also sections covering topics that many airports deal with but have never been addressed in this AC, such as parachute and glider operations.

In the runway chapter, one significant and welcome change is a revision to the departure surface. This change will reduce the planning and design impact of this surface, especially at GA airports. There is also something removed from this chapter: the interactive design standards table. Due to technical issues with getting the table to work, the FAA has moved the contents of the interactive table to an appendix. However, the interactive tool will be available online.

Regarding taxiways, there are some significant changes to the dimensions of Taxiway and Taxilane Object Free Areas, along with taxiway and taxilane separations and wingtip clearances. Especially for large aircraft, the numbers are much smaller in a number of cases. There are many more changes in the taxiway chapter.

The apron chapter has increased from only six pages to 24, and this additional volume is filled with design details that will be very helpful in designing and planning safe aprons.

Chapter 7 (Bridges and Tunnels) is gone and the content of that chapter has moved to Chapter 6, now entitled Airfield Systems and Facilities. This “miscellaneous” chapter is filled with guidance on Navigational Aids, bridges and tunnels, compass calibration pads, and a variety of other topics. There is an extensive section about designing roadways on airports, which is a welcome addition. Nearly every airport has roads in the operating area, but clear guidance on the design of these roads was hard to come by.

This draft 13B represents a significant change from the previous version of the foundational AC for the design of airports. It may take some time to track information down in the new document and it is definitely much longer than it used to be, but many holes from the previous document have been filled and the document is organized better and more readable, in our opinion. Overall, we believe this is a significant improvement. We look forward to the final document being published so we can put it to work planning and designing airports.

What do you think? Have you looked at the new AC? Please feel free to reach out to our airport staff and we would love to hear what you think or answer any questions you may have.

Dave Mitchell, PE is T-O Engineers' Aviation Services Manager. For 21 years, he has served as a member of our Aviation Services Team. For more information regarding the Draft FAA AC 13B or to speak to Dave you can contact him via email: dmitchell@to-engineers.com.