Roundabouts & Why We Love Them 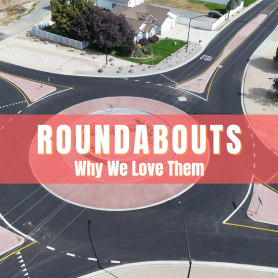 Adding Up the Numbers

The roundabout evolved from the decades-old rotaries or traffic circles prevalent in the northeast. The 21st century traffic roundabout directs a one-way circular flow of traffic without required stops or use of traffic signals. Current design of these traffic control structures has advanced lightyears from the first iteration of the design which required drivers to yield to vehicles entering the circle. Now, the highly efficient, and incredibly safe, modern roundabout requires yielding at entry, giving those already in the circle the right-of-way.

Even with the ease of travel, the public generally perceives roundabouts as a less safe option than the traditional signalized intersection. This unease and unfamiliarity stems partially from the sheer number of signal-controlled intersections compared to roundabouts. However, the statistics for intersection mishaps are sobering. Common causes of intersection crashes include speeding, running red lights, failure to yield right of way, and failure to signal. While every intersection incident is an opportunity for examination and improvement, intersections nationwide still account for over 2.5 million accidents per year according to the Federal Highway Administration, including:

By contrast, the World Economic Forum reports that the state of Indiana noted the following statistics of their 256 roundabouts:

A 2019 study conducted by the Insurance Institute for Highway Safety (IIHS) showed that the safety of two-lane roundabouts improves over time, as drivers become more familiar with them. IIHS researchers evaluated two-lane roundabouts built in Washington State noting that crashes decreased an average of nine percent per year, with a one-third decrease in incapacitating injury. Finally, a Minnesota study focusing on roundabout safety and issues involving pedestrians with disabilities failed to quantify any results after researchers couldn’t identify enough conflicts to study. Subsequently, a later Minnesota study found a 57-63% reduction in pedestrian incidents and up to a 16% reduction in cyclist crashes.

The benefits offered by roundabouts to the driving public and community are numerous and engineers continue to improve upon designs to make these traffic solutions even more efficient and safe. “The more roundabouts we design, the better the safety and performance,” said T-O Engineers’ (T-O) project manager Rebecca Fouts, “We’ve had years to improve the traffic signal and we’re taking what we’ve learned and growing as engineers to improve roundabout design for the traveling public, pedestrians, bicyclists, and trucks.”

A recent traffic study conducted by T-O Engineers examined a roundabout in Caldwell, Idaho reporting an unusual number of crashes with a single circulatory lane. T-O noted that each of the four legs had two approach lanes with one lane designated for right turns only. By studying the crashes, it was determined that the right-turn lanes appeared to contribute to the incidence of same-direction, sideswipe crashes. Further examination of the existing traffic volumes found that while multi-lane approaches worked well during peak traffic hours in relation to volume and capacity of drivers, the right-turn lanes offered little measurable value. Therefore, a low-cost countermeasure to close the right turn lanes during off-peak hours was proposed to reduce crashes. An additional safety benefit resulting from this measure included a decrease in the crossing distance for pedestrians.

Other roundabout improvements include minimizing speed, narrowing angles at entry points, and altering the depth of the central island to better accommodate all traffic, including trucks. The better designed and more effective roundabouts become, the more they will serve to change public perception. “As a former regional operations engineer who has a passion for signals, I clearly recognize the values and tremendous benefits roundabouts offer to all vehicular traffic, including trucks of all sizes. They can safely use roundabouts, we can do a better job designing for trucks and educating truckers that roundabouts can accommodate large loads by effectively using the truck apron,” said Fouts. 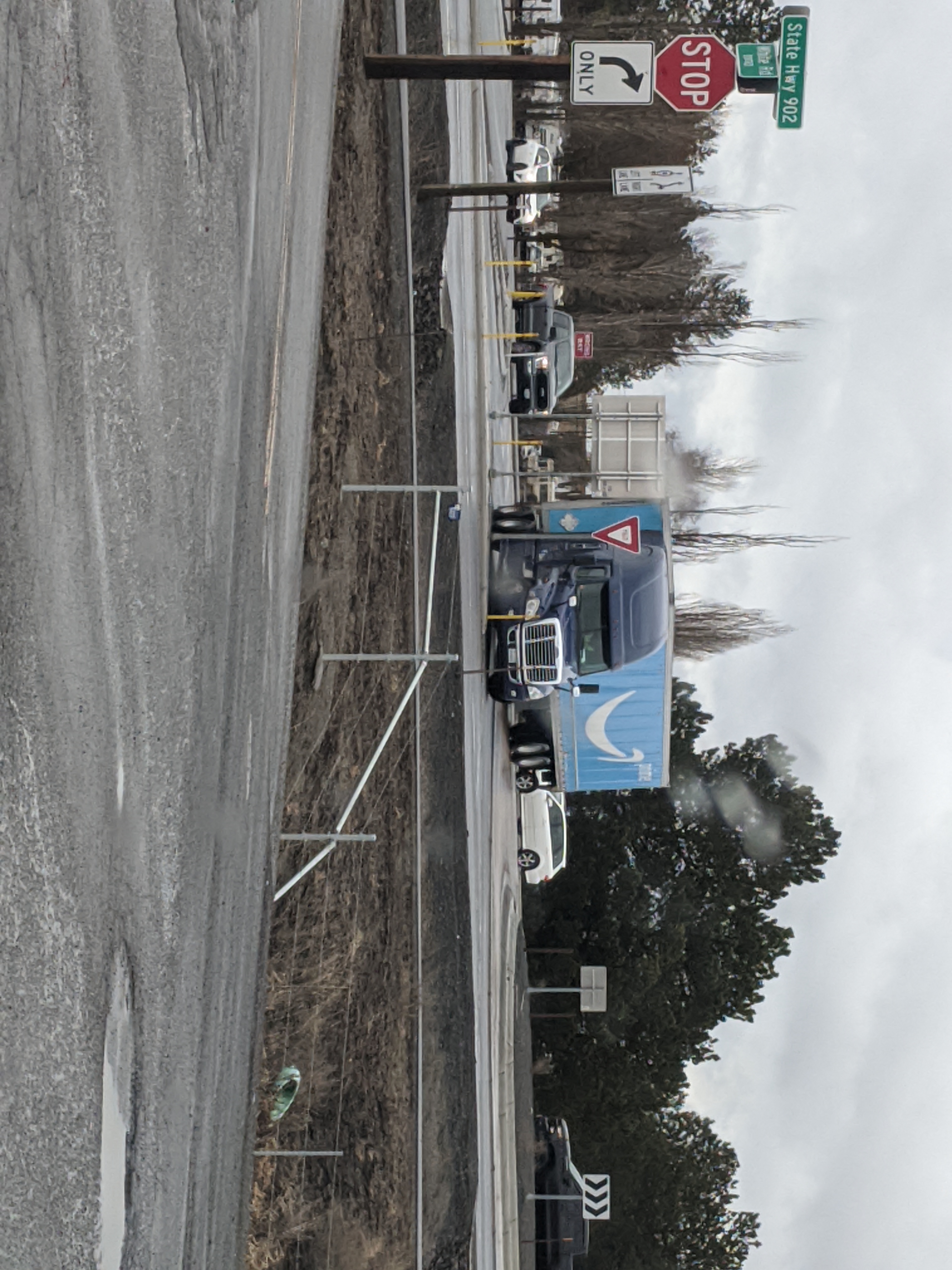 The functionally designed apron and modification of the depths of the central island make roundabouts truck-friendly providing stability and structure, while balancing speed and creating less impact for bigger loads.

Roundabouts typically have increased signage and illumination that can be damaged by vehicles. Lessons learned by studying the damage to directional and informational signage and lighting has resulted in optimal lighting placement, enhanced pavement markings, and grooved, durable, in-line pavement signage as tactics to keep roundabout markings and lighting functioning optimally.

It’s All About Connection

Roundabouts are a human-scale traffic control device — they require awareness and engagement of the driver to traverse. Every form of intersection control requires a gap for the driver, cyclist, or pedestrian to enter the intersection and complete their maneuver. Roundabouts process these gaps better than any other form of intersection control and can serve a vital role as vehicles become more connected and drivers less engaged from the driving task. “When handling gaps, a roundabout is much simpler and more efficient with the driver evaluating vehicle conflict from a singular direction and entering the roundabout by filling the gap when an opening arises,” said Larry Frostad, Project Manager, T-O.

There is also connection at the community level as each roundabout, an iterative undertaking, presents an opportunity for a community to enhance, as well as reflect the individual identity of a locale through landscaping and other beautification. “I’ve seen roundabouts installed as a retrofit for an existing traffic signal, but I’ve never seen a traffic signal replace a roundabout. Once a community sees the many benefits of the roundabout, they’re sold,” said T-O’s Garrett Scott, PE, PTOE.

Safety Benefits. The very nature of one-way traffic in a roundabout reduces collisions and severity of injury as it eliminates head-on and left turn accidents and forces reduced speeds — accidents that do occur are less severe/non-life-threatening. Conflict points are reduced for both vehicles and pedestrians who have shorter crossing distances with less complexity. There are fewer opportunities for vehicles to come into contact with one another. A typical intersection has 32 conflict points compared to 8 conflict points in a roundabout. 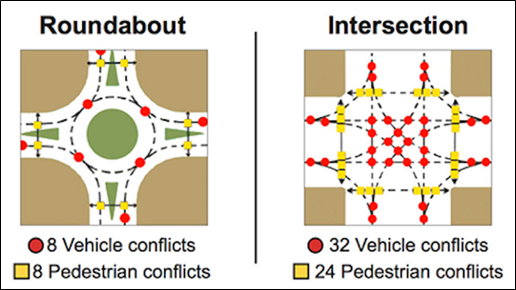 Cost/Lower Maintenance. Typical signalized intersections have a 24/7/365 response system to handle nuisance and maintenance issues such as non-working or flashing lights, signals out, vehicular damage, accidents, and timing problems. In addition to maintenance and repair expenses, personnel must be trained and paid to operate the systems as well as field and dispatch repair calls. Conversely, a roundabout has no traffic signals to repair or replace, and no technology to be updated.

Uninterrupted mobility and operations 24-hour/day with no need for an expensive response system.

Multi-modal benefits with the most balanced solution for pedestrians, bicyclists, and motor vehicles.

Placemaking creates aesthetically pleasing roundabouts that provide opportunity for beautification, native and indigenous planting, and site-specific enhancements while showcasing the unique elements that make up a community.

Flexibility in design allows designs to be adjusted to the communities’ needs, budget, and topography while giving the engineer opportunities to optimize safety and performance.

Improved operations of the roundabout increase mobility performance, even allowing for U-turns to maximize safety and flow of traffic.

Many comprehensive community plans specify roundabouts as a treatment rather than an enhancement. “We can help communities design roundabouts that treat traffic symptoms as well as beautify the neighborhood while enhancing mobility. The roundabout checks all the boxes,” said Frostad. “We show a model to the community comparing the volumes of both the roundabout and a signalized intersection — invariably the potential to beautify and personalize a roundabout coupled with improved safety and mobility performance shows a clear alignment with overall goals. A picture is always worth a thousand words.”