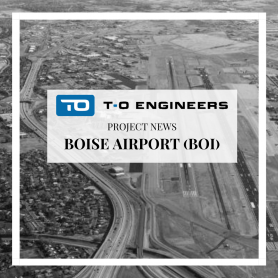 As quoted by Boise Mayor David Beiter during BOI’s press release on the project – “Reducing the City of Boise’s energy footprint is a priority across all of our operations. As with most things it does, the Boise Airport is helping to lead the way in this arena. Efforts like these help ensure the sustainability of our operations and match perfectly with the values and expectations of Boiseans.”

This project was funded in part under the Federal Aviation Administration’s Voluntary Airport Low Emissions (VALE) Program, the purpose of which is to reduce emissions from airport activities.  The City of Boise received an Airport Improvement Project (AIP) Grant to fund approximately 90% of the project. The system currently produces water for locations prior to the security checkpoint. Any excess hot water that is produced can then be piped throughout the airport in the colder months to assist with heating the airport.

The installation of the solar panels to the roof of the terminal, installation of new tanks and piping, and the conversion of the water heating system was completed by RM Mechanical, Inc. of Boise, Idaho.  The final construction costs, which were awarded through City of Boise Resolution #FB-088 on January 17, 2017, amounted to $209,134.53.  The Notice To Proceed for ordering the equipment was issued on February 16, 2017, construction predominately took place during the summer, and the project was completed on October 29, 2017.

For more information about this project check out the link below: