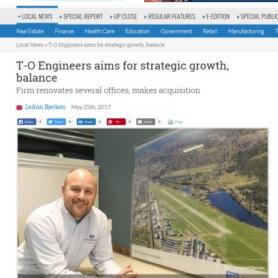 J.R. Norvell is the company’s regional manager as well as the head of its Spokane office at 121 W. Pacific. He says the company is looking to keep its growth strategic by focusing on expanding its core services and deepening its existing client relationships in the region.

“We’re very conscious of the impact growth can have on our employees and our client relationships,” says Norvell. “We want to make sure to provide a stable balance going forward, but we also hope to use this momentum to expand our service offerings.”

Founded in 1984 as Toothman-Orton Engineering Co., it changed its name to T-O Engineers in 2007 following an ownership transition.

T-O currently has 90 employees, split among its five locations, including its Meridian headquarters and offices in Boise, Nampa, Coeur d’Alene, and Spokane.

“We just moved our headquarters to Meridian a year ago, and Pharmer Engineering’s office now serves as our Boise location,” says Norvell. “We also just completed remodeling work at both our Coeur d’Alene and Nampa offices.”

Norvell says the company’s Spokane office now has a total of seven full time employees, and its Coeur d’Alene office is now up to 14 staff, having just recently added four new positions.

Norvell grew up in the Coeur d’Alene area, and attended the University of Idaho, earning a bachelor’s degree in civil engineering in 2002. He spent the first thirteen years of his career working with the company in its Boise and Coeur d’Alene offices before helping to open the Spokane office in December 2015.

While T-O is working to strengthen its core service divisions at each of its office locations, Norvell says it’s particularly interested in further development of its municipal division, using resources and clients gained through its April acquisition of Pharmer Engineering.

Norvell says the acquisition was a win for both companies, as each will be able to bring the other’s expertise to their respective clients.

“Pharmer (engineers) are known as top industry experts in industrial and large municipal wastewater treatment,” he says. “Through Pharmer we can offer more services to our existing clients, as well as offering their clients the use of some of our services.”

Following the acquisition, Norvell says, T-O added 10 additional professional staff members across its office locations. He says new employees work not only within the company’s municipal water and wastewater division, but also with its surveying, land development, and transportation divisions.

“With the added expertise and client base that Pharmer Engineering has provided, our municipal team will grow at a very steady speed,” he says.

“Since 2005, Pharmer Engineering has helped cities throughout the Northwest receive over $46 million in grants and loans for water, wastewater, transportation, and energy efficiency projects,” he says. “Pharmer’s resume and experience alone will add to the T-O Engineers municipal group and allow us to provide better services to even more municipal clients.”

Norvell says that due to the acquisition as well as other factors, T-O Engineering expects its revenues to rise by as much as 20 percent this year.

“The past two years have been good years, but in terms of growth we stayed fairly flat,” he says. “At this point we have new, talented professionals on staff, as well as factors like a strong economy, and growth in areas like land development working in our favor.”

Norvell says the company usually is working on about 50 projects in the region at any given time, with about 20 of those being in the Spokane area. Depending on the type of work involved, the projects can take from a week to two years to be completed, he says.

“Smaller projects like surveying take the least amount of time,” he says. “Some of the larger airport planning and development projects need to include design and funding efforts, so those take much longer.”

Recent projects the firm has worked on include the design of the newly opened Schweitzer Mountain lodge, a Sonic restaurant in North Spokane, a civil site design for Sharper Lending, and a parking lot expansion and survey project for UPS in Spokane Valley.

“Aviation makes up probably 40 percent of the work we do,” he says. “We serve a total of 19 airport clients, 14 of those being in Washington. This region is really an aviation hub, with both aviation business and manufacturing having grown a lot in the past few years.”

Norvell says with most airport clients, T-O functions as a kind of on-call extension of the airport’s engineering department.

“We are open to help our clients 24-7,” he says. “This role includes anything from airspace analysis, aircraft parking, funding applications, new businesses recruitment, lease exhibits, and parking lot repair plans.”

He says in the last five years, Spokane Airports in particular has invested about $15 million in backbone infrastructure work, much of which T-O Engineers has been a part of.

“In the last seven years T-O Engineers has completed more than 450 tasks just for Spokane Airports,” he says. “They’ve really worked hard to create a thriving business environment, particularly out at Felts Field. We were part of a $7 million taxiway improvement project there just last year.”

While airport work is a big part of what keeps T-O going, Norvell says looking ahead the company anticipates a need to expand several of its other core divisions, particularly transportation, municipal, and land development.

“As this area has become a more desirable place to live, we’ve begun seeing the need for better infrastructure and transportation, as well as land development,” he says. “In the coming years, we’ll likely see more general infrastructure projects as the region works to keep pace with the in-fill population.”

To prepare for that growth, he says the company is looking to hire someone to oversee its land development division here in Spokane.

“We’ve done some land development work, so it’s on our radar, but it hasn’t really been our focus,” he says. “Now we’re hoping to find someone who can devote 100 percent of their focus to those projects, and really developing that division.”

Norvell says the company also expects to see an increase in transportation projects, particularly in Idaho, as last month the Legislature there approved a bill authorizing the state to bond up to $300 million through what are called grant anticipation revenue vehicles. Known by its acronym, the GARVEE program that enables states to pay for road projects by borrowing against future federal highway funding allocations.

Looking ahead, Norvell says T-O Engineering also is interested in getting more involved in various communities through sponsorships and volunteer work, as well as assisting local universities with research projects.

“T-O and Avista Corp. have teamed up to work with graduate students and faculty from both the University of Idaho and Boise State University to research new energy-efficient technology, through an Idaho Public Utilities research tariff,” he says. “We work with students on proposals and the patenting process, providing them with professional resources and contacts. It’s a five-year research project, and we’re in the third year now.”

Norvell says the company also is in the midst of remodeling its Coeur d’Alene office to accommodate more employees, and currently is hiring for eight open positions within the region, including an aviation planner and professional land surveyor.

“Our goal is to continue to help clients achieve their goals, through a combination of professionalism, integrity, and responsiveness,” he says. “We’re excited to see what the future holds.”