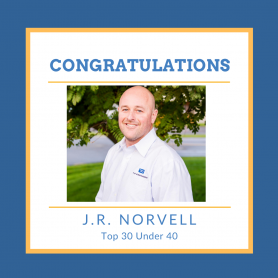 T-O Engineers is proud to announce that Project Manager, JR Norvell, was honored as one of the North Idaho Business Journal’s 2013 30 Under 40.

Each year the citizens of North Idaho are invited to nominate individual business and community leaders. Twenty-six professionals under the age of 40 were awarded this year at a celebration in downtown Coeur d’Alene, Idaho.

Norvell began his professional career at T-O Engineers as an Engineer In Training working at the Coeur d’Alene airport. Since his first assignment Norvell has matured into a talented professional engineer who is considered to be one of the best in the airport consulting business. In 2008 Norvell was offered a partnership with T-O, where he has continued to grow the success of the company.

“Loyalty and hard work have proved fruitful in business with long-time clients who I respect and enjoy working with. Additionally, I have long-time coworkers who share the same values. This has given me the edge to be a success,” Norvell said.

From all of us at T-O Engineers, congratulations JR!